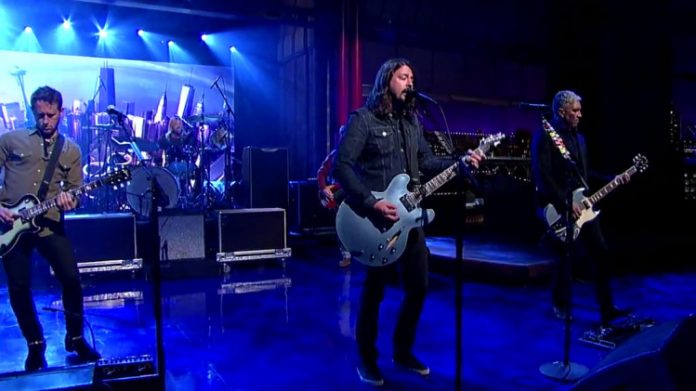 The Foo Fighters will be releasing their new album “Concrete and Gold” in September, and Dave Grohl recently teased that the “biggest pop star in the world” makes an appearance on the album. Grohl now regrets that decision, because people won’t stop asking him who might be appearing on the new album.

Fans seem to have their own theories in regards to who it might be, and Adele is a name that seems to be making the rounds frequently. However, fans hoping to hear Adele’s voice on the album are sure to be disappointed, because Grohl has ruled her out.

“Everyone thinks Adele sang on the record. She didn’t sing on the record. I fucking love her, she’s an amazing person. I love her personally, and I of course also love her music, but I think everyone made this correlation because Greg had produced her. I’m like, ‘F**k, I wish it was Adele. Goddamn, that’d be amazing.'”

Another artist that fans have been mentioning quite a bit is notorious pop star Taylor Swift. Grohl had nothing but good things to say about Taylor Swift, but he also denied that her voice is on the album.

“Ooooh, that’d be a good one. Wasn’t T-Swift. She’s pretty rad, but… That’s the thing. Maybe everyone should just start submitting their wish list and then the next album will be ‘We Are the World.’ We could do this.”

Sorry Foo Fighters fans, but it looks like you’re going to have to keep guessing a little bit longer.

You can catch the Foo Fighters on tour this fall at the following dates: